“You’ve Been Served.” Should You Say it or Save It as a Process Server in Oklahoma City? 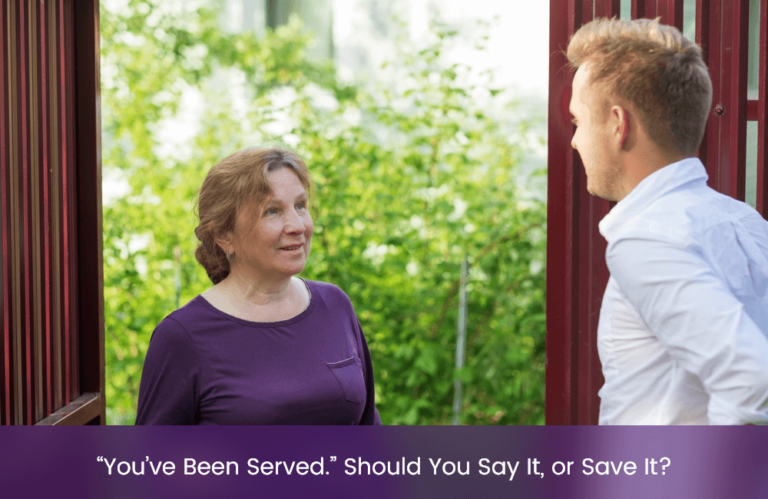 “You’ve been served.” These four words can strike fear into the heart of even the most hardened criminal. But what exactly does it mean to be served in Oklahoma? And what are your options if you find yourself on the receiving end of this legal notice?

Being process served in Oklahoma City simply means that you have been notified of a lawsuit. Once you have been served, you must respond to the lawsuit within a certain period or risk having a judgment entered against you by default.

The process serving in Oklahoma can vary depending on the jurisdiction but generally involves the delivery of legal documents by a process server in OKC or sheriff’s department. Sometimes, service may be waived if the parties agree to accept service by mail.

What Does It Mean to Be Served by a Process Server in Oklahoma?

If you have been process served in Oklahoma City with a lawsuit, it is crucial to seek legal advice as soon as possible to avoid missing the deadline for responding. Failing to respond to a lawsuit can result in a default judgment being entered against you, which can range from an order to pay damages to the other party to the seizure of your property.

If you have been process served in Oklahoma with a summons and complaint, this means that the person suing you (the plaintiff) has already filed their lawsuit with the court. The summons is a document that tells you that you have been sued and that you need to file a response with the court. The complaint is a document that sets forth the plaintiff’s claims against you.

If you have been process served in OKC with just a summons, this means that the plaintiff has not yet filed their lawsuit with the court. However, they must do so within a certain period after serving you with the summons, or they will lose the right to sue you entirely.

Once you have been process served in OKC, your first instinct might be to ignore it and hope that it will all just go away. Unfortunately, this is not an option. If you do nothing, the plaintiff will almost certainly get a default judgment against you, which could result in wage garnishment, seizure of your bank accounts, or even jail time.

Is It Legal for a Process Server in Oklahoma City to Serve Someone by Saying “You’ve Been Served”?

In the legal world, “service of process” refers to the delivery of documents that notify an individual that they are being sued or that they need to appear in court for some other reason. There are a few different ways that service can be performed, and one of them is by saying, “you’ve been served.” This method is known as “personal service,” and it involves delivering the documents directly to the individual in question.

In most cases, personal process service in Oklahoma must be performed by a third party who is not involved in the case, such as a process server in Oklahoma City or a sheriff’s deputy. However, there are some circumstances under which an individual can serve papers on their own.

For example, if the person being served is located in the same state as the person who is filing the lawsuit, then self-service may be an option. Regardless of how service is performed, it is important to ensure that all of the necessary paperwork is delivered in a timely and accurate manner.

Other methods of service include leaving the papers with a responsible person at the defendant’s home or place of business, mailing them to the defendant’s last known address, or publishing a notice in a newspaper (in some cases).

What Happens After I’ve Been Served by a Process Server in OKC?

The first thing you should do is read the papers closely. They will explain what the allegations are against you and what you need to do next. If you don’t understand something, seek the help of a lawyer. Once you’ve read and understood the papers, you will need to decide how to respond.

Criminal proceedings can be very confusing, especially if you have never been charged with a crime before. The first thing you should do is read the papers closely. They will explain what the allegations are against you and what you need to do next. If you don’t understand something, seek the help of a lawyer. Once you’ve read and understood the papers, you will need to decide how to respond.

If you plead guilty, you will be convicted and may face punishment such as a fine or imprisonment. If you plead not guilty, the case will go to trial and a jury will decide whether or not you are guilty. If you plead no contest, you are neither admitting nor denying guilt, but you agree to accept punishment if the court finds you guilty.

Once you have decided how to plead, you will need to appear in court on the date specified in the papers. At that time, the judge will hear your plea and decide whether or not to proceed with a trial. If a trial is held, witnesses will be called and evidence presented before a verdict is reached.

Depending on the outcome of the trial, you may be sentenced to punishment such as a fine or imprisonment. In some cases, the charges against you may be dropped entirely.

Should I Say Anything to a Process Server in Oklahoma?

You might be tempted to ignore the papers altogether, but that is generally not a good idea. The court will not take kindly to you, ignoring their summons, and it could result in harsh penalties. The best course of action is usually to respond to the allegations in a timely manner. This shows that you are taking the matter seriously and are willing to engage in a dialogue.

H2: What Should I Say to a Process Server in Oklahoma City?

It is important to remain calm when writing your response. Do not make any admissions of guilt or liability. Instead, state that you deny the allegations and request a hearing so that you can present your side of the story. Once you have written your response, be sure to sign it and date it before mailing it back to the court.

The first step is always to consult with an experienced attorney who can help you understand your rights and options under the law. Depending on the facts of your case, there may be several defences available to you that could result in the case being dismissed entirely.

Even if such an outcome is unlikely, an attorney can help to minimize your exposure and damages if the case does go forward.

If you’ve been served with legal papers in Oklahoma, don’t panic—but don’t ignore it either. Your best course of action is always to consult with an experienced attorney who can help evaluate your case and determine how best to proceed. With process server in Oklahoma City help, you may be able to get the case dismissed entirely—or at least minimize your exposure if it does go forward.