Moral and Ethical Dilemmas Process Servers and Private Investigators Face When Asked to Serve and Investigate Friends, Relatives and Colleagues 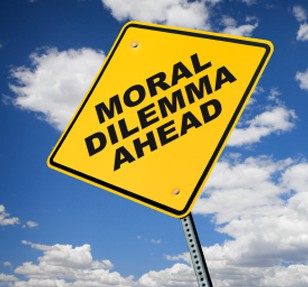 Anyone who has ever worked as a process server or private investigator for any length of time knows all too well that eventually the profession hits a bit too close to home.  Perhaps an attorney sends out a serve to the owner of a process serving company without ever mentioning the name of the person the papers are for.  The process server opens up the envelope only to find that – wow – the serve is for a friend, family member, or even a colleague.  Likewise, at times businesses, governmental agencies, or even friends, relatives or colleagues will ask an Oklahoma private detective to investigate someone close to him or her.  These kinds of situations can present moral and ethical dilemmas for both Oklahoma process servers and private investigators.  Oklahoma Judicial Process Servers www.OklahomaJudicialProcessServers.com examines ways to handle these situations.

Obviously, most process servers and Oklahoma private investigators do not want to serve their friends, family and colleagues.  Well, perhaps those who feel wronged or otherwise badly mistreated these individuals might, but generally speaking most people would not.  So, what is a process server or private detective to do?  Several possibilities exist.

Professionally speaking, it is not advisable to inform someone else that he or she is about to get served with court papers or that he or she is the subject of an investigation.  Process servers and licensed private investigators must remember their duty to their profession and the level of integrity involved.  It goes without saying that in this particular circumstance, this is seldom an easy thing to do.

Of course, professionals on the other side of the fence would contend that because the process server or Oklahoma private detective declined the case, he or she should be able to inform the other parties involved.  Those with this contention would emphasize the ethics of family and friendship over professional obligations.  Surely this is justifiable, right?

Then again, should society permit police officers, judges, district attorneys, etc., to simply toss out any legal charges against their family members and friends, without going through a presumably unbiased legal process?  Should teachers whose own children are in their classes be allowed to give them the highest grades without requiring that their kids put forth any effort?  Should librarians get to waive any late return fees for their friends and family that they would not otherwise waive for other patrons?  These are all legal and ethical issues that many public servants must face.

There is one action that a process server or private investigator could take that would definitely cross both legal and ethical boundaries.  Let us assume that a process server in Oklahoma City, Edmond, Yukon, Norman, Moore, El Reno, Stillwater, Bethany, Midwest City, Mustang, Tulsa, Stillwater, Del City, Piedmont, Guthrie, Lawton, or elsewhere accepted the assignment from the client, knowing that the person who he or she needed to serve or investigate was his or her relative, friend, colleague, etc.  How ethical or legal would it then be for that private process server to then turn around and tell the client that he or she “could not find” the individual?  What if the process server eventually “found” the person, but not before he or she had first had the opportunity to file suit or take other preemptive legal action against the client?  Once again, what if the private investigator investigated the matter, but not without first tipping off the individual who was the subject of the investigation, thus ensuring that any devious or criminal behaviour that person might have been engaging in changed accordingly for the duration of the “investigation”?  This kind of activity on the part of the private process server or Oklahoma private eye would definitely constitute both legal and ethical violations.

The only other viable option would be for the process server or private investigator to take the case.  He or she could choose to have an employee work the case, making it possible to still make some money.  While process servers usually do not have to go to court to testify, many private investigators do.  Thus, a company’s name is likely to surface in the judicial process of testifying.  Ergo, even though the owner of the private detective agency might have delegated the serve to another private eye, the friend or relative is still likely to end up knowing the owner’s company name and/or his or her personal identity.

On the other hand, the process server or private detective could also opt to perform the work, whereby the family member or friend would almost definitely know who served or investigated him or her.  This might work well for a process server or private investigator with a vindictive streak and nothing to lose.  This tactic could also give the person an “inside track” to the friend or relative, as that person is probably less likely to suspect that a friend or family member would serve him or her papers or conduct a private investigation.  Of course, this approach will likely burn any existing or future bridges toward positive friendship or family ties.  One never knows when he or she will need to cross that bridge or build a new one in the future.  Thus, all process servers and private detectives should give serious consideration as to whether or not this pathway constitutes the best approach.

All of the options involved in deciding whether or not to serve or investigate a friend, colleague or relative are indeed very complicated.  There is no clear road or path to take that does not mean losing a potential client, money, friendship, or running into ethical or legal issues.  Those who run process serving companies and private detective agencies should give serious thought as to whether or not to serve a friend, family member or colleague, as well as the possible ramifications of their decisions.