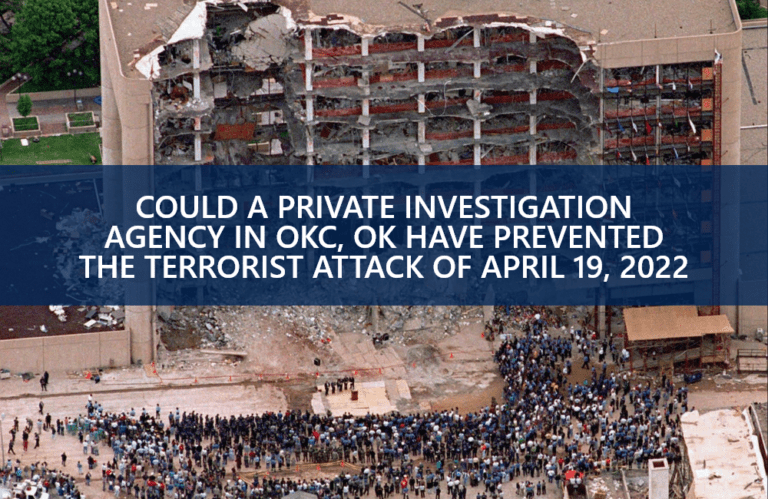 The Oklahoma City bombing in 1995 remains the deadliest act of domestic terrorism in U.S. history. The rescue and recovery efforts of the local, state and federal workers involved in the aftermath were commendable and can never be forgotten. However, the event raises whether a contribution from the city’s private sector and a private investigation agency in Oklahoma can help the local and state institutions avoid future acts of terrorism?

The terrorist attack of April 19 in Oklahoma City

The perpetrators of this terrorist act were Timothy McVeigh and Terry Nichols. They were two anti-government fanatics with white nationalist and right-wing terrorist tendencies. The bomb went off at 9:02 a.m. Within a 16-block radius, the bomb blast destroyed or damaged 324 other structures, shattered glass in 258 neighboring buildings, and pulverized or burned 86 cars. “Source – Wikipedia “

As reported by the FBI:

“It killed at least 168 people, injured over 680 more, and damaged over a third of the structure of the Murrah federal building, which had to be demolished later. The total cost of the damage is expected to be $652 million. In the aftermath of the attack, local, state, federal, and even international authorities engaged in major rescue efforts.” The personnel included military, police, firefighters, doctors, surgeons, ambulance drivers, rescue vehicle operators, and private investigators in OKC.

The public sector will always provide policing and private investigations in some capacity. Still, private security organizations, private investigators in Oklahoma City, and community patrols can help fill in the public sector’s gaps. In Oklahoma City, allowing the private sector to take up some of the police and investigative obligations of public law enforcement can help to improve the safety of a region.

Integrated Security Services, Inc. reports that “Because much of the country’s infrastructure is now under private hands, a cooperation between the U.S. Department of Homeland Security (DHS) and private industry could improve communication between public-private partnerships. Indeed, some security experts believe that outsourcing some DHS departments to the private sector, most notably the Transportation Security Agency (TSA), would be more efficient. FEMA has already demonstrated this form of cooperation.”

The Department of Homeland Security is a massive government department that cannot function effectively without the private industry’s knowledge, support, and assets to conduct research, solve problems, and share intelligence data while escaping the government’s bureaucratic restrictions. Public-private collaboration is required for communities to minimize inhabitants’ fear of crimes by increasing local environmental barriers that inhibit crime. It will also allow the police departments to focus on more severe concerns while assisting the DHS by sharing intelligence on significant terrorist targets and enhancing communication lines, strengthening resiliency in the United States. Some private investigators in OKC may also have the specific knowledge and expertise that the police may require. “Source – Homeland Security Department ”

They also have access to resources that law enforcement may not have, such as their collection of previously solved case files. These private investigators in OKC also always have a vast network and large circle of personal contacts. If necessary, they may even go undercover to collect evidence that police officers would otherwise be unable to obtain to avoid a domestic terrorist attack. See how a private investigator in Oklahoma City can assist you in finding a lost person. If the case includes intellectual property theft, for example, private investigators in Oklahoma are likely to be more knowledgeable about patents and trademarks than police detectives.

Modern information technology has made it possible to compile and retrieve such data cost-effectively. The business sector may be willing to share that info and figures with government departments. Find a reliable and trustworthy private investigator in Oklahoma City.

Several services are associated with private enterprises, such as accountants, lawyers, real estate brokers, and even art dealers. But, particularly private detective agencies in OKC should be used to fight against modern terrorism.

Factors behind domestic terrorism in the U.S.

Terrorists inspired by a variety of ideologies, including Islamist, far-right, and idiosyncratic strains, radicalized on or via the internet, and finding out about the availability of weaponry, in the United States are the most likely threat to the United States. While ISIS’s ability to inspire has waned in recent years, white nationalist fanaticism is becoming increasingly violent.

When it comes to the Islamist terrorist threat, the most significant concern is terrorists who are inspired by ISIS rather than assaults carried out by ISIS, such as those witnessed in Paris in 2015 and Brussels in 2016. Rather than foreign nationals infiltrating the country, the most common terrorist threat to the United States is indigenous and home-grown. Any travel bans implemented by the government are ineffective in dealing with such threats.

Get in touch with a reliable and dedicated private investigator in Oklahoma City.